Fireworks on the Pitch and Off Celebrate the 2018 Florida Cup

Orlando, Fla. – Jan. 24, 2018 – The 2018 Florida Cup drew new clubs and more fans to Central Florida thanks to exhilarating on-field drama as the championship was decided in the final match of the tournament, much to the thrill of the thousands of Atlético Nacional supporters who were on hand to push their team to victory. 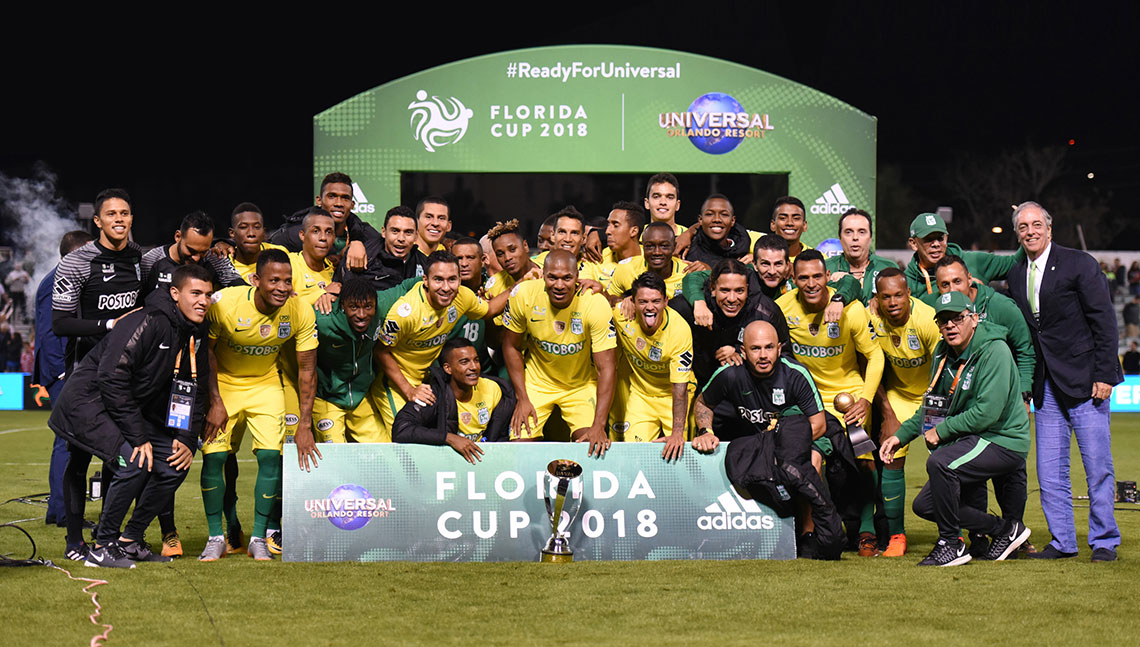 By early measures, the Florida Cup 2018 was a resounding success. Four internationally renowned clubs made their tournament debut and the level of play raised the bar for future events. With 24 goals scored and two penalty shoot-outs over eight matches, the event did not fall short of thrilling moments. In the end, a three-club race for the Cup featured Rangers FC, Barcelona SC and Atlético Nacional, with all three delivering remarkable performances. But only one club, Los Verdolagos, managed to keep a clean sheet throughout the tournament, a first in Florida Cup history, and earned the right to hoist the trophy Saturday night in St. Petersburg.

Off-the pitch, the 2018 Florida Cup enjoyed increased awareness throughout Central Florida thanks to a growing love of the international game in the Soccer Capital of the Southeast. Average attendance increased more than 20 percent over the prior year, with large crowds on-hand for the Jan 10th opening match at Orlando City Stadium, the Jan 13th battle between Rangers and Brazilian champions SC Corinthians, the Atletico Nacional debut in Orlando on Jan 14th and at the final match in St. Petersburg.

The 2018 event also featured a year of firsts for the annual tournament – including its first partnership with Universal Orlando Resort, which hosted several clubs as well as the two-day Florida Cup Fan Fest enjoyed by thousands of fans. This was also the first year the Florida Cup hosted the adidas Tango League featuring some of the world’s best amateur soccer talent, also held at Universal Orlando Resort.

Youth and Community were a predominant theme, as the Florida Cup partnered with Montverde Academy to host FC MAST, a U17 and U19 youth tournament featuring some of the top clubs in Central Florida. The champion of each age group was honored during a special half-time ceremony at UCF’s Spectrum Stadium on Jan. 15.

Florida Cup also partnered with City of Orlando’s Hispanic Office for Local Assistance (HOLA) and the Department of Families, Parks and Recreation to host Puerto Rican evacuees displaced to central Florida due to Hurricane Maria, and children who participate in the City’s after school programs. More than 1,500 tickets will be distributed to these local entities thanks to the support of the City of Orlando.

All of the above could not have occurred without the support of Florida Cup’s partners and sponsors. Long-time partners like adidas, Lennar Homes, ELO, Orlando Health and UCF were joined by Universal Orlando Resort, Avianca, Body Armor, and more.

“We would like to thank all our partners, the clubs, the City of Orlando and most importantly, all the fans who came out to enjoy ten days of world-class soccer and entertainment right in our own back yard,” said Florida Cup CEO Ricardo Villar. “Without the continued collaboration and support of the community, we could not host this spectacular event each and every year. Work is underway for the 2019 Florida Cup, and we look forward to an even bigger event next January.”

About the Florida Cup:

The Florida Cup is the largest annual international celebration of soccer held in the Sunshine State. A global platform that combines sports and entertainment, the event draws the best international clubs with a world-wide fan base, leading international sponsors like adidas, Lennar Homes and Universal Orlando Resorts, and is broadcast live across five continents. The 2018 event will feature popular soccer clubs from Europe and Latin America such as Rangers FC from Scotland, PSV Eindhoven from the Netherlands, Poland’s Legia Warsaw, Atlético Nacional of Colombia, Barcelona SC of Ecuador, and Brazilian powerhouses including 2017 Serie A Champions SC Corinthians. The world’s premier players and passionate fans will convene in Central Florida January 10 – 20, 2018 for a final pre-season tune-up and kickoff to a World Cup year.